Yes, I’m still here. As I alluded to in my last post, I became a mom partway through 2013, and that effectively devoured all of what I once considered “my free time,” including that which I used to devote to blogging. I’ve enjoyed watching my son grow from a tiny bundle of reflexes in the crook of my arm, into an chatty, inquisitive toddler who stuffs fistfuls of spaghetti into his mouth, forcefully demands more graham crackers, and rearranges objects around the house without consulting us. (Case in point, my husband’s glasses. We haven’t seen them in a month! They probably went out in the garbage.) It’s been grueling, and sometimes maddening, but motherhood nourishes my spirit like nothing I’ve ever known.

I’ve been reasonably successful at integrating motherhood and my science career. Perhaps I will write more about that topic in the future, when I have a longer view.

Why so quiet? The Oklahoman atmospheric offerings of 2014 were slim to none, and I was on a short tether because, well, baby. My husband went on a couple of panhandle chases, and may have glimpsed a tornado near Larned, Kansas, back in June. I operated KOUN all of once this year with my son babbling happily in his portable playpen beside me. But 2014 has been the first year since 2001 that I actually did not chase at all. Quite frankly, if I had to take a year off, this year would be a good choice.

An update on me: I’m wrapping up a two-year postdoc stint at NSSL, looking at storm mergers and tornadogenesis. I’m about to submit a paper about the 24 May 2011 El Reno tornadic storm, and hope to be able to share more from it soon. (I’ve been dropping some hints on my Twitter feed.) I’ll be starting as a research scientist at CIMMS at the end of September, collaborating intensely with NSSL. I’m pumped! Working with NSSL has always been one of my primary career goals.

For now, I’ll leave you with this photo Tim Marshall shared of us at the TWISTEX memorial back on 31 May 2014. It was a nice remembrance event. Some kind individuals even provided water and pizza to those who came.


I met Deputy Doug Gerten, the first responder to the tragedy, who’s spearheading an effort to have a permanent roadside memorial erected.

I think we were the only ones at the gathering with an infant in arms. I called him “the littlest witness to the El Reno tornado.” At the end, we watched the release of three orange balloons representing the departing spirits of our friends. 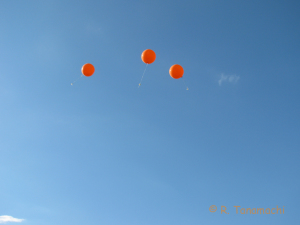