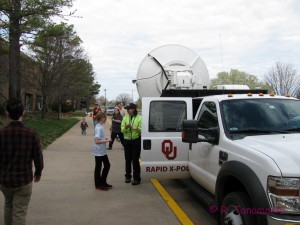 Here, I introduce visitors to the RaXPol radar during a public outreach event at the Oklahoma City Science Museum.

Last weekend, I took part in an outreach event for the opening of the IMAX film Tornado Alley at the Oklahoma Science Museum. RaXPol’s caretakers kindly put me on the insurance for one day so that I could drive it up to the east side of Oklahoma City and back. I was charged with standing next to a radar truck I’d never used, to promote a film I hadn’t seen yet. I had some compunctions about that arrangement, but we were promised a free screening in exchange, so I decided to go for it. (I probably would have seen the film eventually anyway, at my own expense.) I always enjoy a chance to show off my “woman-in-science” cred, especially to a crowd that I knew would include lots of kids. 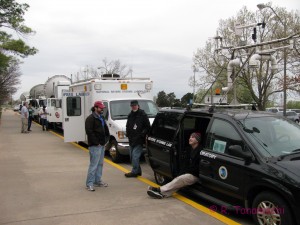 Ironically, Tornado Alley only recently came to the Oklahoma market, despite being released over a year ago and featuring many Oklahoma “talents.” I tried in vain to see it in other cities during my travels, but was always thwarted by logistical impediments. That morning, the Science Museum staff kindly waved me and the other volunteers through the door into the 10 a.m. showing, free of charge. Don Burgess and Terra Thompson gave a brief introduction to the film before the lights went down. At the end, they did a Q & A, while we resumed our posts by our respective trucks, ready to answer questions. I parked down at the far end of the line, so I asked David B. to spin the RaXPol antenna periodically to draw people down my way. Former officemate Jeff S. joined me for part of the afternoon to help answer questions and talk about some of the data he collected in the 24 May 2011 tornadoes. And questions were plentiful; we had steady foot traffic of all ages, all day long. 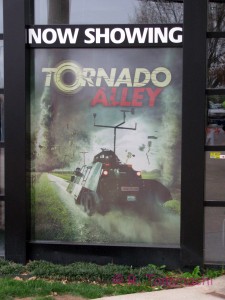 Here’s my review of the film.

Tornado Alley is billed as Sean Casey’s magnum opus, the culmination of eight years of film-gathering in his Tornado Intercept Vehicle (“the TIV”). The film was partially sponsored by the National Science Foundation, who also sponsored VORTEX2. In the film, VORTEX2 mainly serves to provide a parallel story to that of the TIV crew, and that story is heavily CSWR-centric.*

Starting with the whale’s mouth swallowing the audience at the opening, Tornado Alley delivers the spectacular visuals that I’ve come to expect from IMAX. The filmmakers pack plenty of “torn porn” into 45 minutes. We see every frame of tornado footage they’ve got, and happily, they let the audience soak it in for 10-15 rapturous seconds before cutting back to the story. There’s a shot of a multi-vortex tornado that, in and of itself, is worth the price of admission. The IMAX format comes closest to capturing the all-encompassing experience of seeing a real tornado, minus the hours of driving, the bad food, and lightning danger. 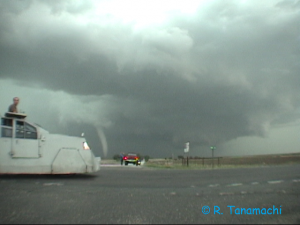 A frame grab from my video, taken near Stockton, KS, 9 June 2005. Two tornadoes, one light (left) and one dark (right, behind the white sign) can be seen in the background. Sean's head is sticking up out of the TIV's front "sunroof" as it turns left onto the gravel road. The resulting shot is used in the IMAX film, but, confusingly, is implied to be a tornado from 2009.

However, the narrative is a mess. The filmmakers try to squish together eight years’ worth of footage on the TIV side to parallel two years’ worth on the VORTEX2 side. I spotted tornadoes from 2004 through 2008 being passed off as tornadoes from 2009 and 2010. Goshen Co., WY makes an appearance a few moments after the 9 June 2005 Stockton, KS twins. (I was there. I even have video of the TIV turning down the road from which they got their shot.)

With regards to the science, the film punches far below its weight, especially so considering that it’s an NSF-funded excursion. We get a few minutes’ explanation of how a supercell, and then a tornado, form. They don’t quite dumb it down to the clichéd, “cold air mass + warm air mass = tornado.” But it’s not much better than that, not to mention that the animations accompanying the explanations look relatively crude for 2011. There’s almost no attempt to tie this rudimentary understanding to the story. At one point, Bill Paxton announces, “Sean Casey has picked the wrong storm.” In my mind, I immediately cried out, “Okay, why is it the wrong storm?” But hungry minds like mine are left wanting. The narrative is so jumbled that I can’t figure out what day it actually was. I can’t even go back into my own chase logs and look it up.

The climax of the film is supposed to be Sean Casey capturing IMAX film from inside a tornado. “The Shot” turns out to be a bit of a let-down, but I can’t say I was surprised. Every serendipitous film or video I’ve seen from inside a tornado has shown blinding rain, flying leaves and branches, and not much else. There’s no glorious, Twister-esque view up the tornado’s throat, no choral accompaniment, no dancing lightning bolts, no maelstrom of recognizable debris. I left as convinced as ever that there’s no point, visually, to driving into a tornado, because there’s nothing to see there. (In fact, I’m starting to think that Mr. Will Keller may have been full of it.)

To sum up, Tornado Alley contains a few truly delectable tornado morsels. But at the end of the film, I felt like I’d eaten a single buffet plate, not a three-course meal.

*Just in case you’re wondering: I’m not in it. The IMAX crew took one shot of my team in hurry-up-and-wait mode at a park in Kimball, NE, in 2010, but that shot didn’t make the final cut. The big group drive-by shot also cuts in just after Team Howie is out of frame. Drat!