During my interview blitz last week, I was asked by multiple reporters to tie the recent Moore tornado to a presumed overall upward trend in the number of U.S. tornadoes. This was a poorly posed query, for two reasons:

Secondly, although media coverage of tornadoes has undoubtedly increased in the last few decades, to the best of our (researchers’) knowledge, the actual number of tornadoes has not. When adjusted for population growth (read: more eyeballs looking for tornadoes), the trend since ~1950 is essentially flat. Here we see an example of what is known as the availability heuristic: People can more easily recall recent tornadoes than those farther back in the past, especially now thanks to saturation coverage of tornadoes. Viewers may reach an erroneous conclusion that the total number of tornadoes each year is increasing. I’d imagine the same holds true for shark attacks, child abductions, and deaths from falling coconuts.

After a near-midnight arrival at our hotel, we (Dan D., Dan S. Steve W., and I) awoke near Wichita Mid-Continent Airport Sunday morning. We were in prime position at the western edge of our target area, which spanned a considerable longitude band – all the way from Guthrie, OK to Topeka, KS. Our logistical and tail-end Charlie biases urged us to move south. We evaluated the obs and high-res guidance mid-morning, and decided to target an outflow boundary near the KS/OK border. We crossed the border via the Kansas turnpike and sweltered through the lunch hour sitting stationary in Blackwell, OK.

When the Wichita storm attracted our attention, we were hesitant to backtrack north for fear of being suckered. From the McDonald’s parking lot, we watched a steady stream of identifiable chase vehicles pass us headed north on I-35, evident on Spotternet as ant trails. As the Wichita storm grew into an HP supercell, we heard reports of a destructive tornado moving into Wichita – right over the hotel where we’d spent the night, in fact – and wondered if we’d made the wrong decision.

We did eventually backtrack north a few miles into Kansas, targeting the next storm southwest of the Wichita storm near Wellington, KS. It quickly gusted out. We continued south on U.S. Hwy. 81 until it kinked west at South Haven, KS, delivering us into the inflow notch of the next storm in the line. A mile or two west of South Haven, a dense precipitation shaft loomed at the southwest end of the line. As we approached, we observed a dense cluster of chasers parked along U.s. Hwy. 81, watching the approaching hook ball. The time was about 4:35 p.m. CDT.

I happened to lean forward in the driver’s seat and see a finger of white cloud extending down toward the field to our southwest. I quickly pulled off the road and pointed the funnel cloud out to my companions, who jumped out with cameras at the ready.

The narrow South Haven tornado kicked up a small dust whirl in a field less than a mile to our south. At one point, the upper portion of the tornado was almost directly above our car. We darted west briefly, then followed the sinuous vortex back east toward South Haven until it dissipated outside of town.

The South Haven storm congealed into the line and gusted out, so we continued southwest to another non-tornadic cell. Nature called, and I pulled briefly into a gas station in Braman, OK. The town’s tornado sirens went off while I was in the bathroom, and when I came out, I was nearly swept up in a group of customers and employees that was hastily packing itself into the gas station’s freezer. As I walked against the crowd flow towards the front exit, a gas station attendant moved to intercept me, a walkie-talkie in one hand, eyes glinting with concern, arms outstretched as if to grab me and carry me into the freezer. I simply looked him in the eye and sidestepped him, and he let me exit to the parking lot with a shrug.

We hopscotched south and west to each new storm along the line as it back-built into drier air. In the meantime, news of the destructive tornadoes spawned from the Edmond-Arcadia-Carney and Lake Thunderbird-Shawnee storms trickled through to us. We could see the backsheared anvils of both of those storms to our distant south. Our final target storm produced a brief funnel cloud over Blackwell, OK, but we called off the chase near Newkirk when the storm moved over the road hole around Kaw Lake. We made it back to Norman in plenty of time to get a decent night’s sleep for work the next day. 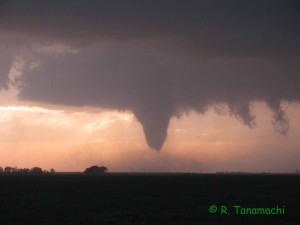 This day proved to be one of my favorite chases in the last five years. I saw two long-lived, photogenic, slow-moving tornadoes. The only thing that could have made it even more perfect would have been the absence of property damage. (Even when it is “just a house” destroyed, it still belonged to someone!) At least there were no injuries.

Given that it was a moderate-risk Saturday in what had theretofore been a rather lackluster, non-stormy May, we expected Kingfisher-esque crowds of storm chasers in western Kansas. In a bid to reduce the number of cars on the roads, Dan D. and I took two passengers along: Dan S. and Steven. W. of the UK Met Office, who were in Norman for the HWT Spring Experiment. Neither of them had seen a tornado before.

We found the crowds in Greensburg, KS – site of an infamous EF-5 tornado six years earlier. With that heavy history weighing on us, we spent a couple of hours hobnobbing with other chasers, munching convenience store food, and watching elevated showers percolate behind the dryline. In the meantime, a storm up near Ness City began to entice us with a hefty, 60 dBZ hail core and hook echo – but we judged it was too far away, and moving away too quickly, to be a viable target for us. One tower finally solidified northwest of Greensburg around 5 p.m., and we headed up U.S. Hwy. 183 to investigate. Its base was elevated, but persistent. We waffled on whether to stick with this target, or head back south to a less-organized cluster of thunderstorms in Lipscomb Co., TX. We eventually chose the bird in hand, and followed our target storm into Kinsley, KS.

As we drove through Kinsley, our radio crackled to life with reports of a high-based funnel beneath our storm’s still-elevated base. We spotted at least three of them between the buildings and trees. We continued north up U.S. Hwy. 183, and stopped once we noticed that our storm – now a supercell – was merging with a second, more modest cell approaching its right flank. (Part of my current research investigates whether this type of merger is beneficial to tornadogenesis. There are some anecdotes suggesting this might be the case.) We parked about four miles south of the intersection of U.S. Hwy. 183 and KS-156, where we watched the bases of the two storms merge and the cloud base drop.

Soon enough, the wall cloud extruded a few rotating scud fingers. We gingerly stepped out of our car (a few CGs were striking too close for comfort) and set up our tripods. Sure enough, around 7:15 p.m., a funnel cloud drilled lazily downward to our west. Over the course of the next several minutes, it morphed into a majestic stovepipe, and finally a symmetric cone with a flared dust cloud around its base. The funnel appeared to occlude at least two times, and disappeared entirely before returning for an encore performance. Our two guests from the UK seemed suitably impressed. This tornado is now known as Rozel, KS, tornado, in reference to the nearest town.

Protracted rope-out phase of the Sanford, KS tornado. At this point, the condensation funnel was completely detached from the cloud base overhead.

The storm was now north of our latitude, so we packed our gear back up and headed east on KS-156. We hadn’t gotten more than a mile or two before Dan D. hollered for me to stop the car. In a field less than a mile to our north, a new lowering and dust whirl were visible. I backed into a small pull-off and we all set up our tripods again, watching as the Sanford, KS tornado took shape. From our vantage point, it moved from right to left, then back from left to right, then reversed its course yet again. (Watch my time lapse footage near the end of this video.) These motions may have been in response to rain-filled downdrafts that we observed in close proximity to the funnel.


As with the Rozel tornado, the Sanford tornado appeared to dissipate completely before returning for an encore (zombie-nado?). This is why I always try to leave the camera running for an extra minute or two when the show is apparently over! We called off the chase in Larned, KS, before heading to Wichita for the night.

I am still getting my bearings back after three straight days of tornadoes. Yesterday, I watched the Moore tornado form from the controls of the KOUN radar on the north side of Norman.

It was my first time to see a tornado while not actively chasing. As I watched it track past me to the northwest and disappear into the murk, I crossed my fingers that it would spare Moore. It didn’t. It crossed I-35 between 4th and 19th street, scattering cars, houses, and people like a mammoth lawn mower. The Warren Theater, where I watched a sneak preview of the new Star Trek movie last week, was damaged and pressed into use as a triage area.

I was ready to write two relatively light-hearted posts about my chases last weekend. I just don’t feel that lighthearted anymore. A co-worker of mine lost her home, but fortunately is not injured. My husband and I are going to go through our garage tonight and gather items to donate to people a few miles away who literally lost everything they own. Honestly, how many times can a nightmare repeat itself?

Yesterday is already wrapping up to be one of my best chases in years. I witnessed two long-lived tornadoes – one at 6:30 p.m. CDT near Rozel, Kansas, and the second at about 8:00 p.m. just north of Sanford, Kansas (which we watched from less than a mile away). I shot more than 40 minutes of video and boatloads of stills, and it is going to be some time before I can sort through and upload the highlights. Unfortunately we have learned that one of the tornadoes destroyed a home in Rozel, and our hearts go out to the victims as they begin to put their lives back together.

Today is also shaping up to be a big chase / tornado outbreak day, and we have some crucial decisions to make. So for now I will just leave you with a teaser. Stay safe today in OK, KS, and MO! 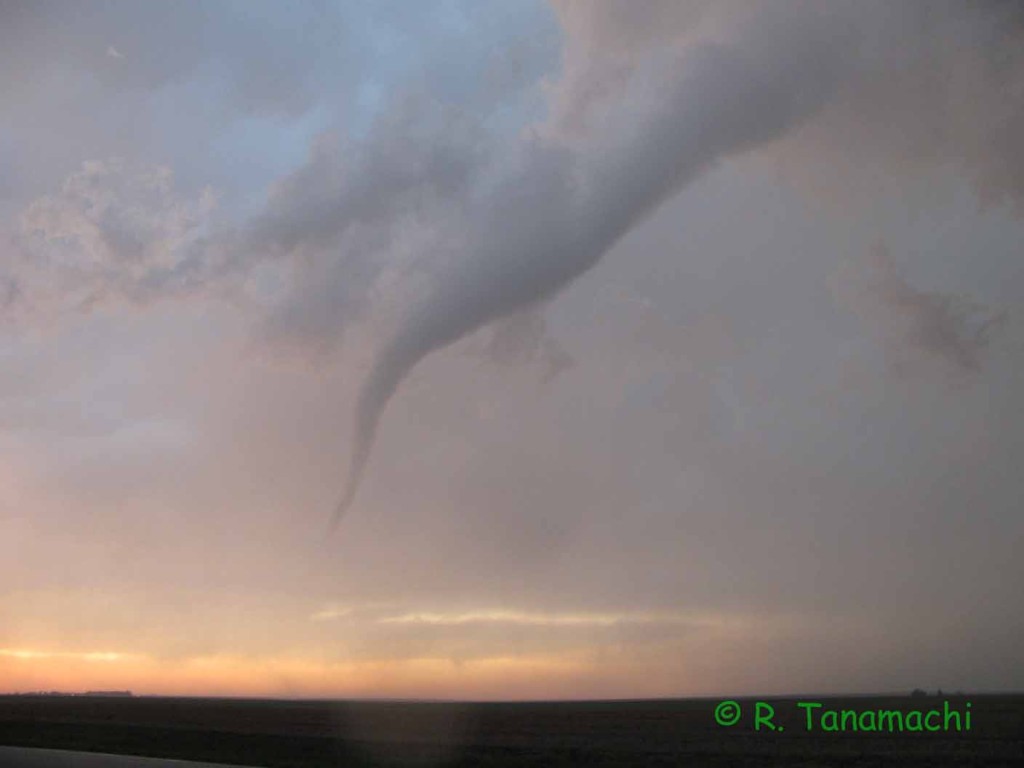