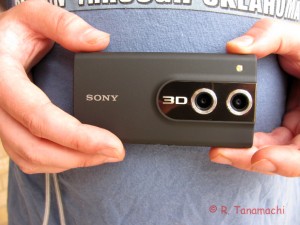 As a reward for submitting a long-overdue manuscript, I recently bought myself a toy: A Sony MHS-FS3 3D Bloggie HD pocket camcorder. I’ve been intrigued both by the idea of “HD in my pocket” and by the recent resurgence in 3D films. This camera is not intended to replace my Canon Vixia HV30; I intend to use it primarily to shoot 3D video of tornadoes for novelty. It also serves well as an HD dash cam, since it doesn’t weigh down my windshield suction cup mount. I tested it out on both 13 and 14 April 2012 chases.

Here’s an example of 3D video I shot on our approach to Cherokee, OK on 14 April. YouTube was smart enough to recognize the H.264 3D format.

It’s teeny, about the size of a smart phone. It’s also fairly intuitive to use, with minimal buttons and menus. I was able to explore most of the functionality before I ever had to crack open the manual. (Owing to the small box size, the camera only comes with a “quick start” instruction card; the full manual is available on Sony’s web site.)

There’s no need to use the pre-loaded “Bloggie” software (intended to facilitate quick sharing of video via Facebook, Youtube, etc.) to offload the videos in Windows 7; the “import” function works just fine. Like other pocket cams, it interfaces with a computer via a Swiss-army-style USB 2.0 port. The viewfinder is actually a “Magic Eye” 3D display, which I find nifty. The camcorder also interfaced cleanly with our 3D-capable Samsung HD TV using a mini-HDMI cable.

The 1080 HD video and audio quality are surprisingly good. I used it on my 14 April chase as a dash cam, turning it on and off whenever something interesting came into view. The battery held out through the entire chase (although admittedly, I was rather frugal with it). My highlights reel from 14 April 2012 contains video from both the Bloggie (dash-cam shots) and my Canon Vixia HV30 (handheld and tripoded). Can you tell the difference? 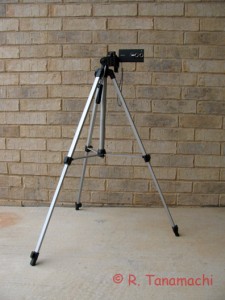 Because the tripod threads are on the side, I have to tilt my tripod head over as far as it will go, then cheat a few more degrees by retracting one of the legs.

To shoot in 3D, one has to hold the camera horizontally. However, the tripod threads are located on the side rather than on the bottom – meaning you need a tripod head that can articulate 90 degrees in order to shoot level 3D video. Fortunately, the camera weighs a scant 4.2 oz, so the danger of tipping over a substantial tripod is minimal, but the placement of the threads strikes me as a serious design flaw.

The internal media only holds about 80 minutes of 1080 HD or 3D HD video. I would love to be able to expand to an SD card, but unfortunately this model does not have that option. 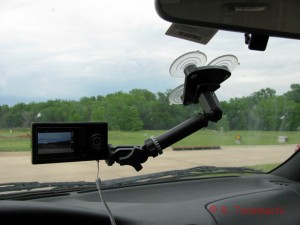 The 4.2-oz. Bloggie holds fast to my windshield with a standard 3-suction cup mount.

There are a lot of “auto-” settings, such as exposure, white-balance, and most importantly, focus. When shooting storms, I typically peg the focus on infinity. On 14 April, the Bloggie yielded a few “wet windshield” shots, but fortunately passing windshield wiper blades don’t confuse it too much. The auto-focus didn’t work very well in low light conditions, as one might expect – it tended to keep the focus on the foreground.

The Bloggie isn’t weatherproof, so you have to keep it dry. Sony makes another model called the Bloggie Sport, which is waterproof, dirt-proof, and drop-proof, but it doesn’t shoot 3D. Oh well.

To summarize, the Sony Bloggie MHS-FS3 is a relatively cheap (<$200) gateway to 3D HD video. It could benefit from some weatherproofing, a few more user control features (particularly the focus), and affordable video editing software. However, it's something new, lightweight, and fun in my chase gear bag, and I look forward to testing it out on future storms.