Holly Bailey has written an engaging account of the 20 May 2013 Moore, Oklahoma, EF-5 tornado: The Mercy of the Sky. I watched this tornado from the window of the KOUN control building on the north side of Norman. From my vantage point, several miles away, it was a silent, bluish-gray elephant trunk on the horizon, cloaked in dust. As it moved past me to the north, crossing I-35 in Moore, I lost all view of it against the background precipitation. I knew lives were being upended – and, in some cases, ended – at the ground beneath it. This book tells the story of the chaos that I could not see unfolding. 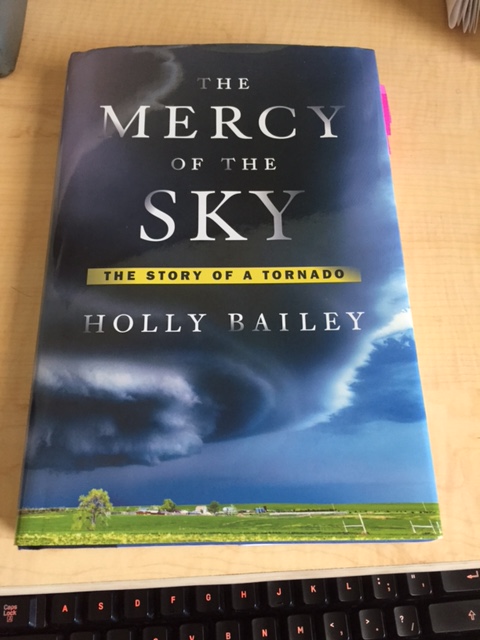 The devastation the 2013 Moore tornado wrought was revealed to me largely via the media over the next weeks and months. I already knew full well the story of the National Weather Service, the local media, and storm chasers’ activities on that day. Familiar dramatis personae like NWS’s Rick Smith and my Ph.D. adviser, Howie Bluestein, are key players in the book. For me, The Mercy of the Sky filled in the story of what happened to the people on the ground in the tornado’s path: homeowners frantically seeking shelter, school administrators and teachers protecting students at Briarwood and Plaza Towers Elementary Schools with their own bodies, a farmhand at Orr Family Farms turning horses loose from their stables in the hopes they might instinctively outrun the tornado, and the heartache of (mis)counting the dead afterward.

So compelling were the tales woven together in this book that I finished it in three days. I came away knowing a short list of the names of the people who experienced the tornado firsthand. Bailey, an Oklahoma native, is a talented writer with a penchant for simile (For example, writing about a group of people watching tornado debris from nearby buildings descend from the sky, “It looked like they were inside a snow globe of construction materials that was slowly being shaken up,” p. 218). She also does a very thorough job establishing the context in which the 2013 Moore tornado occurred, including an abbreviated history of the rise of severe storms research in Oklahoma, the TV “weather wars,” and the 3 May 1999 F-5 Moore tornado. Along the way, I learned some local factoids I didn’t know before (e.g., Jim Gardner, KWTV’s helicopter pilot, was the same pilot who covered O.J. Simpson’s infamous white Ford Bronco ride back in 1994).

Speaking meteorologically, Bailey’s conveyed understanding of storm formation only barely exceeds the clichéd “clash of air masses“, a point she readily admits. She repeatedly refers to radar as a predictive tool that can “project” where storms will go. In fact, radars cannot make predictions, only observations. Additional software tools are required to turn radar observations into forecasts. That may seem like a trivial distinction to most readers, but to me, a research meteorologist specializing in radar data assimilation, the difference translates into an extensive body of research.

In spite of a few hiccups like these, I greatly enjoyed the Mercy of the Sky, and recommend it to anyone interested in learning about the interplay between severe weather and regional culture.

I have a new paper in this month’s issue of the journal Weather and Forecasting entitled “Impacts of a Storm Merger on the 24 May 2011 El Reno, Oklahoma, Tornadic Supercell“. In it, my coauthors and I investigated whether a particular instance of a smaller storm merging into a mature tornadic supercell (“Storm B” in the NWS nomenclature) was related to the “handoff” between tornadoes B1 and B2. The answer, for this particular case, was “No.”

I made a 12-minute presentation about the work behind this publication at the 27th AMS Severe Local Storms Conference in Madison, Wisconsin. To summarize, when we assimilated phased array radar (PAR) data into a model to retrieve the updrafts, I found that, despite the apparent union of the reflectivity contours just before the tornado handoff, the updrafts actually joined together about 10 minutes later, approximately 5 minutes after the tornado handoff. Therefore, we were not convinced that the merger caused the handoff in this particular instance. We speculated, because of the complexity of the interactions between the two storms, that not all storm mergers would proceed like this one. Our speculations align with a wealth of anecdotal storm chaser observations, wherein storm mergers are associated with a spectrum of outcomes ranging from apparent enhancement of to cessation of tornado production. A great deal of research remains to be done on the relationship between storm mergers and tornadogenesis.