I’ve got a paper in this month’s Monthly Weather Review entitled Mobile, X-band, Polarimetric Doppler Radar Observations of the 4 May 2007 Greensburg, Kansas, Tornadic Supercell. This is the first of two planned papers based on my Ph.D. research, an observational study based on UMass X-Pol data that we collected in the Greensburg storm. 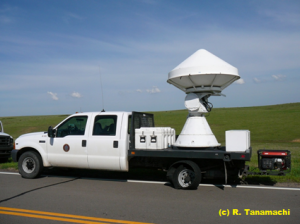 UMass X-Pol on 4 May 2007. Had it not been for the blown tire, we might not have collected data in the Greensburg storm.

Operations on 4 May 2007 started off on a low note. Howie, Kery H., and I were driving the UMass X-Pol to Dodge City, Kansas on our first chase of the season, when we blew a tire. With the aid of a good samaritan who just happened to have a spare that was the right size, we limped into Protection, Kansas. Tornado reports near Arnett, OK tempted the rest of our group back south, and we figured we had a bust chase on our hands. As soon as the new tire was on, a storm erupted southwest of Protection, and we decided to collect some “consolation data” in it and shake down the system.

A local sheriff showed us to his favorite storm spotting place on a hill looking over Protection. That road was too muddy for us to use, so we moved about two miles east and deployed on a packed gravel road. As we lost daylight fast, the storm dropped a rotating wall cloud, followed by a brief tornado and an additional funnel cloud to our west. We got volumetric, polarimetric X-band data of all these features. At one point I had to back the truck up to avoid beam blockage from telephone poles along US Hwy. 160, resulting in a small gap in the data. 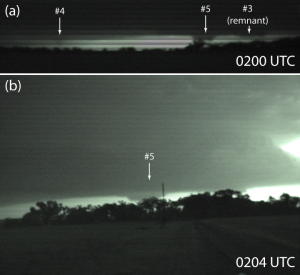 The Greensburg tornado (#5) illuminated by lightning. These are frame grabs from my handheld video.

As night fell, we lost visual on the wall cloud, but the radar presentation showed a giant spiraling hook echo. We were certain there must be a tornado occurring, so we kept collecting data. We had barely any reception of weather radio, but between the lightning crackles we could make out a series of urgent tornado warnings on our target storm issuing from the NWS office in Dodge City, including indications of a large tornado. Occasionally, flashes of lightning outlined a large lowering in the cloud base to our north (see images at right). After collecting more than an hour of data, we finally shut the system off around 9:30 p.m., when the deep-cycle marine batteries on board the UMass X-Pol, used to power the antenna pedestal and computer, completely drained.

En route back to Norman around midnight, congratulating ourselves on a great first deployment of the season, my cell phone rang. Chip L. had been chasing with us earlier in the afternoon, but split off after our tire mishap. “Greensburg has been completely destroyed,” he said solemnly. As an EMT, he had gone there to assist, and witnessed near-complete devastation of a town of ~1500. We stopped at a fast food restaurant in Ada, where a TV screen in the corner of the room flickered images that looked like they’d come from a war zone. The remainder of the drive back was much quieter and more somber. 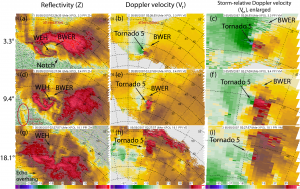 Over the next few days, back in Norman, I pored over the data, and it quickly became clear that this would be my dissertation case. We had captured not only the genesis of an EF-5 tornado, but several weaker, antecedent tornadoes. In trying to figure out why the Greensburg storm changed tornado production “modes”, a wealth of information offered itself up, and that information forms the basis for this paper. Other scientists, most notably Jana H., Howie, Mike U., Jeff H., contributed data, discussion, and analysis to the study. Two anonymous reviewers also helped me to sculpt the messy initial version into something clearer and more concise. (Word to the wise: Don’t just copy-and-paste half of your dissertation into a journal template and submit it. I was lucky the first version didn’t get rejected outright!)

In the years since that night, I’ve driven through Greensburg several times, and have been continually amazed by the community’s resilience and resurgence. When the time came, I dedicated my dissertation research to all the victims of the Greensburg tornado. Although improved scientific understanding can never undo the pain to the Greensburg community, I’d like to think that this study was one small, positive thing that came of an otherwise wholly devastating event. 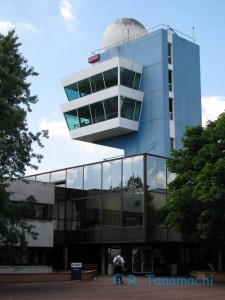 Sorry it’s been a little quiet around here over the last month, but I think I had a good reason. I was getting ready for my first European radar conference: 7th European Conference on Radar in Meteorology and Hydrology in Toulouse. I’d never set foot in France before, and wanted to put my best one forward!

At the Météo France conference center, I presented a talk (about GBVTD analysis of W-band data we collected during VORTEX2) and two posters (both on EnKF assimilation of mobile radar data in supercells). I reconnected with domestic and international colleagues, as well as making some new acquaintances. Between sessions, we had receptions and banquets at several Toulouse landmarks, including City Hall and the 800-year-old Hotel Dieu. 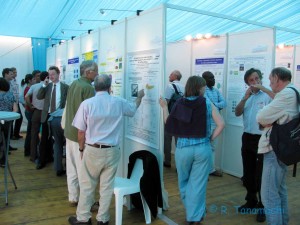 The poster session of ERAD 2012, held in an air-conditioned tent.

I got to see updated versions of some research presented at last fall’s AMS Radar Meteorology Conference in Pittsburgh, as well as some intriguing new work from my European contemporaries. (There weren’t many tornado talks, but there aren’t as many tornadoes in Europe, after all!) On the final day, there were a couple of talks about radar-based aeroecology (detection and characterization of birds, bats, insects, etc.). Fascinating stuff. Biologists are finding gold in the data that we usually ditch in QC! 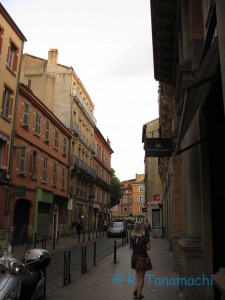 An evening stroll down the streets of Toulouse

Outside the conference, downtown Toulouse was visually pleasing and gastronomically amazing. I took relaxed strolls through the streets and gardens in the evenings, admiring the wrought iron balconies and old chuches, nibbling cheese, and sipping wine. Oh, and taking in Euro Cup matches with the locals, too! The people were, by and large, friendly, and most of the waitstaff at restaurants spoke enough English to get our orders right. I visited 13th-century cathedrals, open-air markets, stunning museums, historic hotels, and verdant gardens.

I figured out early in my stay that I couldn’t possibly pack in all the activities I wanted to do in one week. It’s just as well, because I kept getting lost! And of all the cities I’ve visited, Toulouse was by far the best city to get lost in, slow down, and enjoy.

I’ve returned to find summer baking Oklahoma in earnest. It may not be too long before we dust off the dust devil chasing gear again!