I’m not on the East Coast for Irene, but some of my colleagues are. A subset of VORTEX2 vehicles (SMART-R2, TTU Ka-bands, UAH-MAX, and a mobile mesonet or two) and personnel waited on the North Carolina coast for a red-eye landfall. In addition, RaXPol is getting its hurricane baptism!

As of this writing, Hurricane Irene is a Category 1, with sustained winds of 85 mph, and the best damage the TV news crews can seem to find is some siding peeling off beachfront property. Is Irene being overhyped? I don’t think so. In contrast to previous hurricanes, the threat to humans from Irene is more water-based than wind-based. Flooding will likely be exacerbated by the expansive areal coverage of the hurricane and its relatively slow movement. In addition, Irene (or what’s left of it) is progged to make landfall in SE NY around high tide. Evacuating the low-lying areas around the coast is a prudent move.

I didn’t shoot this video; my fellow storm chaser Mike Hollingshead did. I’m simply among the many who find it fascinating:

No, it’s not a sign of the end times. As an entomologist explained on NPR, midges love marshy areas, and this year’s floods in western Iowa have turned large expanses of farmland into prime breeding habitat.

If I can chase dust devils, I’m certainly not going to fault Mike for chasing bugnadoes! As he comments at the beginning of the video, “a vortex is a vortex to a storm chaser.”

Yesterday, I had the privilege of taking a young weather enthusiast and aspiring meteorologist on a one-on-one tour of the National Weather Center. I nearly always jump at the chance to interact with kid weather weenies. How often do you get to assure one that they’re not alone when they lie on their backs in the grass and watch the cumuli bubble overhead? Or that their science and math skills are not a liability, but an asset? Or possibly provide a vision of how their life might unfold?

As I’ve alluded to in my bio, I didn’t have a single childhood hero or role model that I tried to emulate. I had lots of good candidates, though, mainly ones that I saw on television. I’m privileged to now call all many of these people my colleagues (in no particular order): Lou Wicker, Chuck Doswell, Howie Bluestein, Tim Marshall, Don Burgess, and several others. 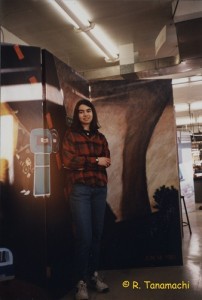 My high school art class painted a multipanel mural depicting Roseville's history, and naturally, I was charged with painting the panel about the tornado that struck the town in 1981. Bonus weather nerd points if you can figure out what image I used as the source.

As much as I admired these individuals, they were still primarily images on a screen to me. Most of them lived and worked in the Southern Great Plains, and seldom had cause to make public appearances in Minnesota, where I was growing up. In 1995 or 1996, my high school held a series of career brown bag lunches. You can probably imagine what they consisted of – the school invited in professionals (engineers, scientists, writers, etc.) to give advice to students seeking to follow in their footsteps, and dispense any pearls of wisdom they had accumulated along the way. Of course, I jumped when I saw a meteorologist on the schedule. I think I was one of two people who signed up to talk to him (the weather gene always has been recessive), and because of my class schedule, I got him all to myself for an hour.

The speaker was a meteorologist from the NWS office in Chanhassen, MN (closest to the Twin Cities). I’m sorry to say I don’t remember his full name or job title, but I think his first name was Mark (or possibly Mike). My recollection is that Mark and I had a very pleasant, casual conversation. He told me about the career path that had brought him to the NWS, and he advised me to continue what I was doing – accelerated math and physics courses.

Naturally, I steered the conversation towards tornadoes, and he recommended that I order a copy of Tornado Video Classics. He even sent me a follow-up letter after we met, containing the address for the Tornado Project, and saying what a pleasure it had been to meet with me. I followed Mark’s advice and got my tornado video fix for the next several years through TVC and its two sequels. I also learned more about the research going on in Norman, and the people who were doing it… information that, as it turned out, foreshadowed my future.

My course toward meteorology was pretty much charted by the time I got to high school, but if my meeting with Mark hadn’t been nearly as pleasant, I wonder if things would have turned out differently. I’d like to think that I would have shrugged off any misgivings and continued on my way, but who knows? Maybe my career trajectory would have led me elsewhere.

Sadly, I lost Mark’s follow-up letter somewhere among several interstate moves, and I have forgotten his surname. As a result, I haven’t been able to satisfy my urge to send him a proper thank-you note and update him on my whereabouts since we spoke 15 years ago. (I tried making an inquiry with the Chanhassen office a few years ago when a classmate-turned-forecaster transferred there, but no one seemed to be able to say with certainty who it was I might have met with.) Perhaps he moved on to another office, or moved into the private sector. Perhaps he doesn’t even remember meeting one dark-haired, flannel clad tornado geek back in the mid-90s. But I certainly remember the kindness that Mark showed me, and have tried to pay it forward in the form of role modeling and patience toward young, would-be meteorologists, like the bright-eyed one I met yesterday.

Mark, if you’re out there, and you’re reading this, thank you!