I was interviewed about my tornado research for Shan Boggs’s blog Interesting People. Mrs. Boggs specializes in science journalism, and she was a pleasure to work with. She previously interviewed my classmate and colleague Dr. Matt Haugland about microclimates.

The radar data graphic included in the blog is actually a figure that was cut from our recently-accepted MWR article, showing the vertical extent of the WEH associated with the 2007 Greensburg, Kansas tornado. Since I spent a few hours putting it together, I’m glad it finally saw the light of day somewhere!

Altus, OK was our initial target. As I merged onto I-44 W from Hwy. 9 with Dan D., Jana H., Jeff S., and Howie B., we saw a disorganized storm roiling over Chickasha, OK. Thinking little of it, we blew on past, targeting the a much better-looking storm down the line near Snyder, OK, and later, yet another storm west of Altus. As we approached Altus on U.S. Hwy. 62, our phones began beeping with robotexts from OU: “Emergency: Tornado approaching. Seek immediate shelter indoors.” Pulling up the radar, we saw that the storm we had blown off earlier had developed a healthy hook echo as it approached Blanchard, and tornado reports were popping up across Norman from credible Spotter Network witnesses. 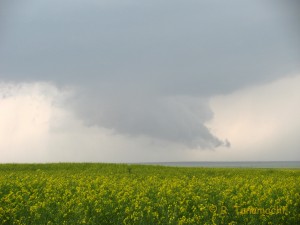 Pained to have missed a tornado at our home base, we instead intercepted our target storm near Victory, OK, just west of Altus. It struggled with outflow contamination from the morning’s convection, producing only a brief wall cloud over blooming broccoli fields. As it merged with another cell to its northeast, the complex began to transition into an HP supercell. Nothing prevents an HP supercell from producing tornadoes, but they tend to be difficult to see. We decided to let the Victory storm head on its merry way. 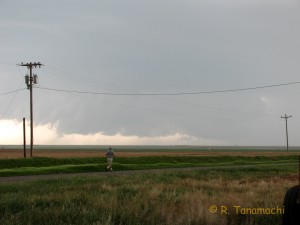 We took another jog west to intercept a developing storm between Gould and Hollis, OK, that we thought would have access to uncontaminated inflow with better moisture. However, the Hollis storm didn’t look much better visually, and in the meantime, the earlier Victory storm had grown upscale and was leaving a trail of tornado reports in its wake. Most of the reports mentioned that the tornado was rain-wrapped – not optimal for visual documentation. We opted to stick to our target storm, hoping against hope that it would tap into better moisture and warmer temperatures to its south, staying a few miles east of it as it “chased” us back to Altus. It produced this ominous shelf cloud over Gould:

Daylight quickly faded, and we headed back to Norman just ahead of an MCS. I had forgotten to affix my new Pikepass sticker to my windshield, and the resulting 30-second delays while we aggregated quarters at each toll booth enabled the MCS to catch up, engulfing our car in blinding rain and dime-sized hail. Once back in Norman, we found large sections of town dark and surrounded by blinking Saf-T-Flares. The earlier tornado initially touched down near I-35 and Lindsey, then scraped northeast across downtown Norman, splitting trees, tossing sheet metal and demolishing a warehouse on Porter St. near the hospital. It was eventually rated EF-1 by the NWS.

Dan D., Jeff S., Mike F., and I headed west on 12 April 2012. SPC had issued probabilities for severe storms from the triple point in W KS down the dryline into the TX and OK panhandles. The discussion mentioned the conditional nature of the severe storm potential; i.e., if storms formed, then they would likely be severe and have a good chance at producing tornadoes.

We initially drove up the northwest passage. We had a shot at targeting the triple point, but opted for the dryline bulge target in TX instead, heading west out of Watonga. The entire drive, we were socked in by low-level cloud cover – not a good sign, since it would limit solar heating and limit the ability of updrafts to punch through the moderately strong cap. It was also relatively chilly for a chase day – temperatures did not rise out of the 60s for most of the day. 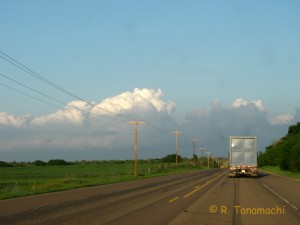 We set up shop in Canadian, TX, where the skies were clearing out, waited, waited, … and waited. Our eyes scanned the horizon for any sign of turkey towers. When one finally did erupt to our south around 7 p.m., we had nothing better to do, so we dropped south after it. A few bubbling cumulus clouds did develop, but none hit the tropopause, we ended up shower-chasing. We ended the chase in Elk City, where we enjoyed a decent supper at the Portobello Grill.

It was a high risk, high-reward situation, and unfortunately our numbers did not come up. In hindsight, at my own peril I opted to ignore a preponderance of model solutions that forecast a cap bust. As they say, however, if you don’t play, you can’t win. 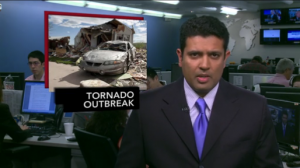 Hari Sreenivasan reporting on the 14 May 2012 tornado outbreak on the 16 April PBS Newshour.

I’m still working on my chase logs for the last few days (some video is already up on my YouTube channel), but I wanted to sound off about two inaccurate information nuggets I keep hearing in media reports of this past weekend’s tornado outbreak, including, unfortunately, on the PBS NewsHour, a broadcast I respect greatly.

1. I keep hearing the number “120 tornadoes” bandied about as though it were an official tornado count. I presume this statistic was gleaned from the preliminary SPC storm reports page for 14 April 2012. The problems lie with the words “preliminary” (self-explanatory) and “reports”, many of which may be redundant and still have to be reconciled. If there’s a burglary, and three people call the police to report it, you don’t count it as three burglaries! (Update: The most recent updated count from Greg Carbin is 60, meaning there were an average of two reports per tornado.)

2. A number of reports have cited NWS for giving “warning 24 hours in advance”. A 24-hour lead time on a tornado warning is simply not possible at present. The SPC did issue a High Risk Convective Outlook more than 24 hours in advance, but not a watch, and certainly not a warning.

That said, the media have done a decent job giving credit to the NWS for being on the ball with this outbreak. Bravo, NWS!

Another, more complete perspective on this topic can be found here.

Southbound on I-35 after three straight days of chasing. The first two days (April 12 and 13) were busts. However, April 14 made up for them; I saw at least seven tornadoes today of all strengths, shapes, and sizes. I really need sleep tonight, but I can’t wait to make slew of photo- and video-laden postings tomorrow.

Just after lunchtime yesterday, I was transfixed (as were many in the NWC) by live video of tornadoes near the Dallas-Ft. Worth metroplex. I did not chase yesterday because (a) it was a work day and (b) every time I’ve tried to chase in the DFW metroplex, it’s been a spectacular failure ending in traffic gridlock. But the supercells riding the warm front meant business. I’ve heard enough nightmare scenarios about a DFW tornado strike from the emergency management community to pass my hand over my brow and be grateful that nobody was killed.

Anyway, I’ve been fascinated by this now-famous video – shot from a helicopter – of the tornado flinging tractor-trailer rigs (or “articulated lorries”, as the BBC calls them) through the air near Lancaster, TX. I don’t know how much these rigs weigh or whether they were empty or full, but I think it’s safe to say that they weigh more than my little Corolla, a substantial SUV, or a pickup truck. I hope some of the “yahoos” watch this video and remember it the next time they consider brazenly driving into tornadoes as though they were little more than glorified dust devils.