Dr. Pam Heinselman needs no endorsements from me, because the quality of her work speaks for itself. Throughout my graduate school career, she was invariably lauded as someone I should emulate. Chuck Doswell called her “a class act.” In addition to being the leader of the Phased Array Meteorological Studies (PAMS) Team and a Presidential Early Career Award winner, she is the public face of the Phased Array Radar program here at NSSL, actively producing educational materials for public consumption and starring in NSSL podcasts and video shorts like this one.

Pam took me under her wing after I got my meteorology shingle from OU in 2011, first as a postdoctoral research scientist (until this September) and now, as a full research scientist. Pam has the pulse of NSSL, and keeps those of us on the PAMS Team up to speed. She also stays abreast of what we are working on, and comes to every meeting prepared to pick up right where we left off. When I send her draft writing, she gently suggests changes in a way that made me feel empowered, not stupid. She’s also given me her full and unwavering support during my transition to motherhood. I’m honored to call her my friend as well as my supervisor. 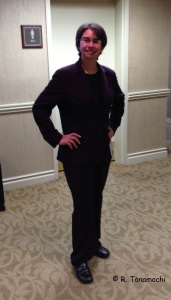 Purple for Pam at SLS

Pam went public a couple of weeks ago with the news that she is suffering from non-Hodgkin’s lymphoma. She posted on Facebook that her first chemo port was purple, which prompted a number of us to wear purple clothes, scarves, and other royal attire to show our moral support. Pam has had a great attitude about her illness and her chances for beating it. Here’s my #purpleforpam pic, taken while I was at the 27th Severe Local Storms conference in Madison, WI last week. Yes, I know I often break out the purple suit for conferences, but this time it has a special significance. I would not be where I am were it not for Pam Heinselman. My warmest hopes are with her as she pursues remission.