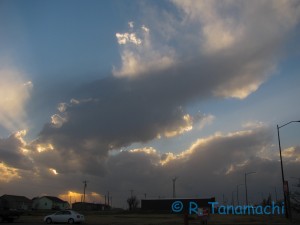 Gusty southerly winds threatened to shove our car out of its lane on I-40 just after noon Saturday. We barreled up the Northwest Passage, dodging unusually aggressive tumbleweeds. We arrived in Greensburg, Kansas as the cumuli piled up on the dryline just to our west. “Hurry up and wait” time passed in the parking lot at Dillon’s, where we watched blips bubble and boil in the dry air for over an hour.

This late in the year, sunset comes around 5:30 p.m. local time (versus 9:00 p.m. or even later during May and June). The shorter days not only restrict photography opportunities, but also limit daytime heating and destabilization needed for storms. Today, however, the chief issue was moisture: although deep, dewpoints barely exceeded 55 F east of the dryline. Towers were too skinny, too mushy, too disorganized to garner any serious interest. 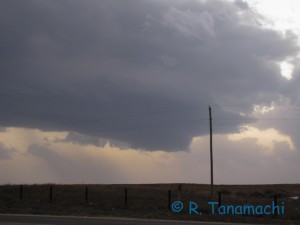 A storm finally did materialize east of the dryline near Shattuck, OK, while the storms over Dodge City, KS, stubbornly refused to organize. We dropped back south to the KS/OK border, where the Shattuck storm had split into two moisture-starved miniature supercells. The base of the anticyclonic left split rotated lazily while a possible clear slot tried to cut across the cyclonic shear side (left). We finally stuck a fork in it at dusk.

Unless a miracle occurs, that is likely to be the end of my 2012 chase season!