The Texas panhandle was crawling with dust devils near yesterday afternoon’s dryline. We were en route back from Boulder, when one of them passed over U. S. Hwy. 87 in front of our car. My husband grabbed my Sony Bloggie 3D and shot this as the dust devil passed over him. He complained for about an hour afterward that he itched from the tumbleweeds scratching against his bare legs!

It’s been a busy month! Immediately after the VORTEX2 science workshop, I traveled north to deliver a keynote talk at the 7th Annual Minnesota Skywarn Workshop. What a difference 15 degrees of latitude makes! Minnesota greeted me with a refrigerator chill. I reverted from a summer dress I wore in Texas back to a winter coat and gloves. No great surprise there – when I was growing up in St. Paul, I remember slushing it to the bus stop as late as the first week of May in some years.

The workshop’s organizer, John Wetter (Skywarn coordinator at NWS Chanhassen) had contacted me about a month earlier to ask if I would be interested in speaking. I jumped at the chance to reconnect with the weather community in Minnesota. And yes, I’ll admit to wanting to visit home for myriad personal reasons. They got a keynote speaker, and I got a trip back home. It was a win-win. 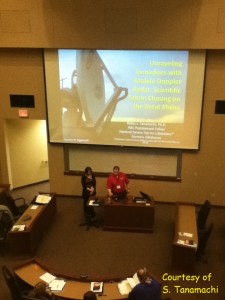 John Wetter (in red) introduces me at the afternoon session of the 2013 Minnesota Skywarn Workshop. Thanks, Dad, for the picture!

The workshop featured a nicely balanced cross-section of stakeholders: professional meteorologists (mostly op-mets from the NWS-Chanhassen and Duluth offices), EMs, members of the media, and educators. The audience members ranged widely in age, and all were keenly interested in all the talks. For my part, I spoke about the use of mobile radar in scientific storm chasing, and how it was about more than just pretty-looking data. I covered topics like dual-Doppler, EnKF, and GBVTD analyses, and of course, fresh results straight outta da VORTEX science workshop from which I’d just come. I worked in some networking between sessions. Near the end of the day, the speakers participated in a panel about social media and other factors influencing the future of Skywarn. I was impressed with the workshop organization; everything went smoothly as silk.

My talk was sourced mostly from my own work, but also from a large number of contributors. Here I credit several people who sent me slides, including Howie Bluestein, Jeff Snyder, Jana Houser, Mike French, and Vivek Mahale. I also knew I needed to include some mobile radar data collected in Minnesota in order make the talk locally relevant. (Our observations tend to be Great Plains-centric, just because of fuel costs.) Mike Biggerstaff, Gordon Carrie, and Kyle Pennington generously shared their results from SMART-R observations of the 17 June 2010 Albert Lea, MN tornado (collected during the VORTEX2 “epilogue” period). Thanks, guys!

The organizers were even kind enough to waive the registration fees for a few of my family members, so they got to enjoy the day’s program and learn useful skills like dual-pol radar interpretation. I’m particularly glad my uncle (former EM for Winona County) and aunt made the two-hour drive up to the University of St. Thomas, even though one of their horses was about to give birth. (Incidentally, the foal – a filly – was born the very next morning.)

I spent the balance of the weekend visiting friends and family. I returned to Norman both professionally and personally satisfied. Thanks, John Wetter, for giving me the opportunity to speak at this well-run venue and make a long-overdue visit home!

It’s been nearly three years since the field phase of VORTEX2 ended. Two weeks ago, a group of about 30 PIs and scientists reunited at a retreat near Austin, Texas. I was asked to send a few tweets from the workshop since the V2 media liason wasn’t in attendance.

At the end of the field phase, the PIs divided up case studies and initiated collaborations. Over the three-and-a-half days of the workshop, participants updated the group on their most recent findings, including low-reflectivity ribbons (a feature whose significance is still not completely clear), an apparent case of bottom-up tornadogenesis, an uber-composite supercell environment generated from over 700 rawinsonde launches, and UAV transects across multiple gust fronts. There were also discussions about lessons learned (particularly from the UAV group), new tools (EnKF analyses have proven to be a popular tool for filling in the spatiotemporal gaps between observations), and directions for the future.

In the past three years, life has changed for many of the participants. Some have changed jobs or institutions, graduated (waves), or had families. In spite of all this mobility, electronic collaborations and conferences have enabled quick dissemination of results. (It took 10 years for some results from the original VORTEX to see print.) Josh Wurman aggregated a list of all the peer-reviewed VORTEX2-related manuscripts published so far: the paper count currently stands at 14, with 9 more either accepted or in press. It was decided that the group will shift focus in the next few years towards synthesis studies rather than individual case studies.

It wasn’t all work, of course. There was time for some fun, including a zip line ride across Lake Ted! 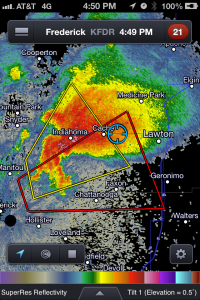 Cutting south across the forward flank of the first Faxton, OK storm on April 17.

It was my first day back at work after a long week of travel that spanned nearly 15 degrees of longitude. (More on that later.) I went into work extra early, and managed to scramble a chase partner (Gerry C.). We departed the NWC just after 2 p.m., and headed southwest on I-44. We initially targeted a storm west of Anadarko, OK, only to abandon it quickly when its high cloud base made frontal undercut evident.

Next, we cut across the forward flank of a tornado-warned supercell passing over KFDR, intercepting it near Cache, OK. Sitting on top of a hill on Cache Road just north of Faxton, OK, we observed a wall cloud to our distant southwest that extended a few enticing purple scud fingers. However, it quickly filled from behind with emerald green and gusted out toward us. 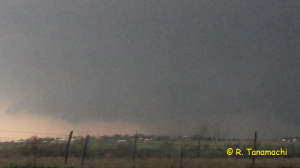 We escaped east toward Lawton with numerous other chasers, but were overtaken by the advancing core. A few nickel-sized hailstones thumped against my roof. I dropped a few miles south on SW 82nd Street and allowed the Faxton storm’s hook to pass by us to the north.

By this point, it was evident that a second supercell – following an almost identical track over KFDR and Manitou, OK – was now the tail end Charlie and the preferred target. Proceeding west along Baseline Rd., we stopped near the intersection with Indiahoma Rd. where we had a good view toward the west and a new wall cloud. Unfortunately, that wall cloud met the same fate as the last one – after rotating lazily, it grew increasingly Z-shaped as an advancing gust front pushed it out from behind.

It was growing darker, and we both needed to return home for logistical reasons. As we merged back onto I-44 at Lawton, we heard a spotter report of a tornado near Ft. Sill, a few miles to our northwest. Our view was blocked by trees, but we could see a dark lowering beneath the cloud base in that direction. We pulled off I-44 for a few minutes to observe, but never saw a tornado or the reported power flashes. We missed the Grandfield tornado, which happened even farther to our southwest, after dark.

By then, the southwest-to-northeast oriented line of supercells was now situated over I-44, signifying a slow and messy return drive. Lou W., who had been nowcasting for us via text message from back in Norman, suggested that we drive straight east through Duncan to I-35, and return to Norman that way. It added about 30 miles to our drive length, but was precipitation-free for all but the last 10 miles. We took the Lindsey Street exit just as our old target storms congealed into a mini-bow. The next morning, my home rain gauge had 2.1 inches of refreshing rain in it.

For your amusement, here’s a video clip from Chris Novy showing spotter network activity during the 17 April event. Despite the number of glowing green ants, we didn’t run into any horde-related issues. We found decent parking spaces and observed safe driving habits all around.