We never even made it to Anadarko yesterday. I woke yesterday to cool temperatures and elevated showers passing through Norman. Not good. Temperatures struggled to get into the 70s all morning as persistent cloud cover and another round of showers kept us from reaching convective temperature. 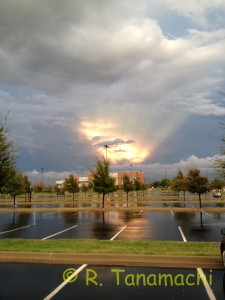 Logistics for the day restricted us to within three hours of Norman, so we focused on looking for isolated convection within a 150-mile radius. Storms began to develop along the Pacific front in western Oklahoma around 1 p.m., and almost immediately lined out. KFDR was down for its dual-pol upgrade, so we had to base our decisions on coarser data from the more distant KTLX. We scoured the kinks and appendages in the line, looking for hints of discretization. Jana B. dropped by in anticipation of a short-fuse departure, and together, we watched the waning minutes of the OU-TX game. An isolated storm went up in the warm sector east of Frederick, OK, and we finally pulled out of the garage around 3:30 p.m.

We arrived in Chickasha, where we had to decide whether to head south on U.S. Hwy. 81 toward our original target, which by then had begun to deteriorate on radar, or west on OK-62 towards Anadarko and a quasi-isolated part of the line that exhibited a mesocyclone. We could see the lowered base of the latter, and we decided to go after it before it raced away to the northeast at 40+ kts. 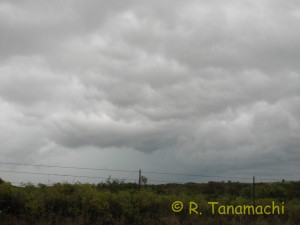 As we approached Verden, OK, a solid wall cloud was visible against an emerald green wall of precipitation. We thought we briefly saw a tapered appendage on the north side of the wall cloud. It only lasted about 20 seconds; no one got a picture.

We headed north out of Verden on a paved county line road, watching as RFD precip swallowed the wall cloud. We turned east when the wind-driven precip crossed our road, and subsequently abandoned the storm as it left us behind in a gush of rain-cooled air. With no other viable storms in the area, and the line now fracturing into dozens of weaker cells, we decided to put a fork in it and headed back to Norman. 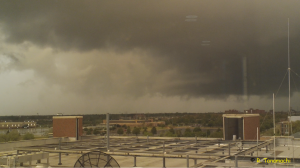 A multicell with a clear slot passes by Norman.

Later that evening, we observed another weakly-rotating, quasi-isolated cell pass north of Norman. A clear slot sliced across the foreground, but that was as good as it got. Sunset treated us to a stunning display of anticrepuscular rays set against mammatus clouds to our east.

In summary, the shear was good, but thanks to the two rounds of morning convection, the CAPE just wasn’t there. At least we didn’t drive very far (< 100 miles)!

I’ll be back in my undergrad stomping grounds to give a talk entitled “Unraveling tornadoes with mobile Doppler radar: Scientific storm chasing on the Great Plains” to the Madison, Wisconsin IEEE section on Friday, 16 November 2012. (The section is generously sponsoring my travel. Thanks, guys!) Here’s their announcement for the talk.

In other news: I’ve got a new job! As of today, I have transitioned to an NRC postdoctoral fellowship at the National Severe Storms Laboratory. I will be working with Dr. Pam Heinselman analyzing phased-array radar data. I’m excited to join her and the Radar Research and Development Division (R2D2)!

Last but not least, please enjoy this sunrise time-lapse I shot from the south rim of the Grand Canyon a few weeks ago on my vacation.

Originally, I uploaded sans audio, but YouTube suggested Carly Comando’s pleasant piano piece “Everyday,” and I decided it was a good fit.