I’d been anticipating this chase opportunity for nearly a week. In spite of that, my chase partners and I showed up late for the party. And in spite of that, we still witnessed a unique sight: a tornado interacting with the Wichita Mountains.

It’s fall in Oklahoma, and the jet stream is moseying back south. A couple of high-amplitude troughs have already swung low across the state, bringing chilly temperatures on brisk northwesterly winds. The long-range models were hinting at another such trough last week, but this one also brought surface moisture, ample deep-layer shear, and steepening mid-level lapse rates with it. There was no reason to hold back.

Our initial target was Altus. My chase partners (Dan, Jana, Jing) and I planned to leave Norman just after lunch. As usual, one thing after another delayed us by a few minutes at a time. Suddenly, somehow, it was 2:00 p.m., and supercells were already grinding across western Oklahoma. One near Frederick quickly dominated the others, all but flashing a neon “CHASE ME” sign. So, after far too much dawdling, we hastily piled into my car and blasted southwest along I-44.

During our haul southwest, our social media feeds lit up with quick pics of a fat, high-contrast cone near Tipton, OK. Earlier in my chase career, it was typical for me to arrive at a tornado-producing supercell, only to have it greet me by gusting out. Obviously, that still happens sometimes, and it’s always a kick in the wallet when a storm I’ve driven hundreds of miles to intercept mockingly turns to grunge in front of my eyes. Internally, I steeled myself for that possibility.

As we approached Lawton, Mt. Scott and the rest of the Wichita Mountains (actually some of the oldest mountains in North America, whose geologic history you can read about here) loomed against slate-gray rain curtains on the horizon. We were about 30 miles from a second tornado reported to be approaching Snyder, a town that had a prior abusive relationship with a tornado. We craned and strained but could not see any cloud base structure at so great a distance.

We debated our plan of attack. Heading west on U.S. Hwy 62 was not an option because the tornado had just crossed it at a 40 mph clip. Jana reminded us that OK-49, the next E-W highway to the north crossing the Wichita Mountains Wildlife Refuge, has a speed limit of 45 mph. Then we remembered the paved ribbon running west out of Elgin to Meers Restaurant, and took it. As we turned right past the cattle pens, promising ourselves a Meers burger some other time, Dan got a text message from Lou Wicker suggesting that we head northwest on OK-115 and intercept the storm near Saddle Mountain.

The mountains, of course, blocked our view of the cloud base for much of our approach. But all the signs aloft (updraft, clear slot) keyed our attention on a darkening shaft behind the scrubby ridges. My certainty of a rain-wrapped tornado surged we rolled up on it: 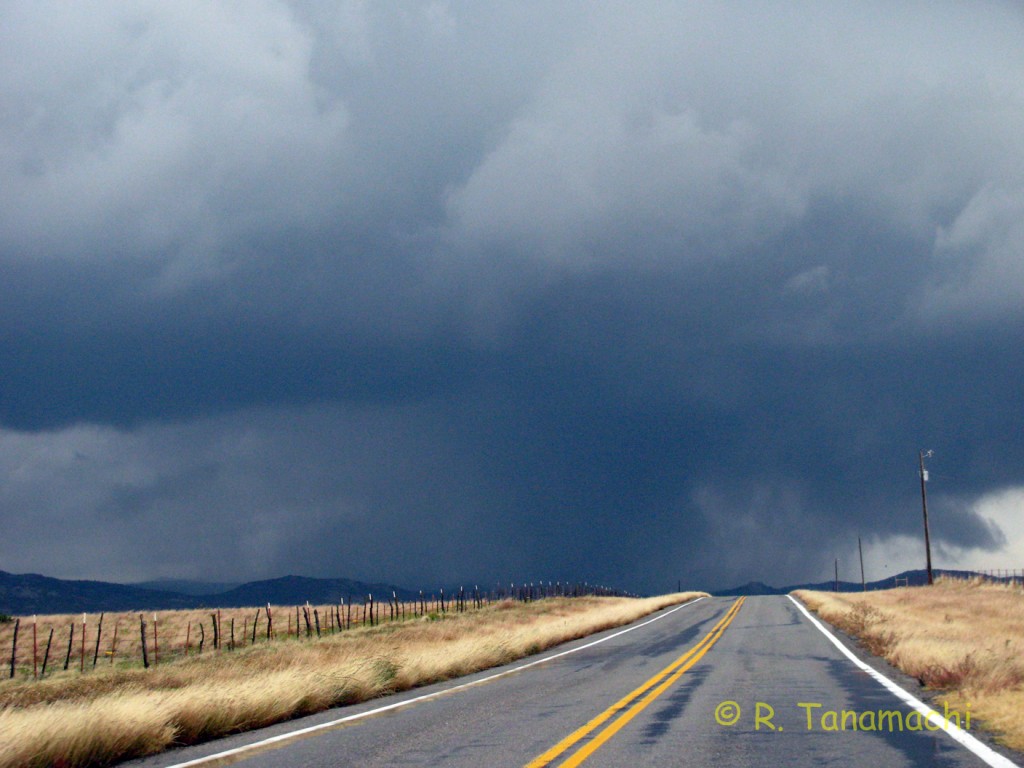 Rain-wrapped tornado in the Wichita Mountains Wildlife Refuge (OK) at about 4:10 p.m. CST

We stopped shortly thereafter and caught the tornado crossing the inverted chins of stone comprising Saddle Mountain, and later passing in front of the wind farm just to its northeast. We observed it for about 15 minutes, repositioning once, and never saw another vehicle the entire time. Here’s my video.

Note that the trees on the hillsides are turning red – it really is autumn in Oklahoma!

I’d never witnessed a tornado interacting with complex terrain from such a short distance before, so observing its looping contortions was an unexpected treat. I also hadn’t gotten to watch a tornado in solitude for many a year. Apart from two news helicopters hovering behind us, my companions and I had the tornado all to ourselves. I kept expecting other cars to go zooming past, but the road behind us stayed curiously, almost eerily, vacant. We’re guessing the wildlife preserve forced many of the other chasers to divert around it to the west; very few came at it from the east. Sometimes, being late to the show has its advantages.

After the Wichita Mountains tornado was swallowed by a descending reflectivity core, we were hard pressed to catch up to it. We crossed the damage path (plastic bags, bits of sheet metal, and other miscellaneous trash caught in barbed wire fences and trees) just north of Saddle Mountain, nearly flattening a tire on a laid-out stop sign, then stair-stepped along gravel roads near Albert, occasionally catching sight of promising shallow cones dipping out of the cloud base. On the descent into Fort Cobb, we finally found the chase hordes, fixated on a multi-vortex tornado lazily twirling just west of town: 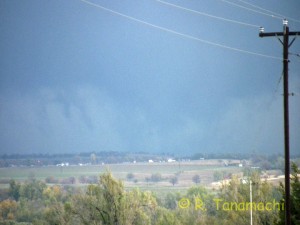 After that, we rapidly fell behind the storm, and daylight dwindled to dark grayish-blue. We headed back to Norman by way of Tuttle – our favorite dust devil chasing spot this past summer, and were back at the NWC before 7:00 p.m.

NWS documented at least 6 tornadoes from this storm, including the two we witnessed. My husband was able to take more video than I was, because I was driving. Here’s his highlights reel for this chase:

Two interesting follow-ups to this one: