Yesterday saw the arrival in Norman of Howie Bluestein’s new Rapid-Scan, X-band, Polarimetric mobile Doppler radar (RaXPol for short). It’s a radar primarily intended for tornado research, but which also has a myriad of other potential applications.

Yes, we’ve had radars mounted on trucks since the mid-1990s. What makes RaXPol special? Watch this:

That video clip is not sped up; that really is an 8-foot dish rotating at 180 degrees per second! By gradually changing the elevation angle, it can potentially collect a full atmospheric volume of polarimetric data in less than 30 seconds. Why is that important? Tornadoes can change drastically on time scales of only a few seconds, so the faster scientists can collect volumes, the more information we’ll have about those rapid changes. The polarimetric capability will allow researchers to distinguish different types of hydrometeors, debris, and other scatterers in supercells and tornadoes.

One might expect the entire truck to wobble with a giant antenna swinging around on its bed. The engineers addressed that issue from the design stages. As can be seen in the video clip, the entire truck remains surprisingly static, even without the hydraulic levelers deployed. Seasick crew members will not be an issue.

And as for the problem of “beam-smearing” (insufficient dwell time) that might result from such a rapidly rotating antenna, the engineers implemented a multi-frequency Tx/Rx system. Conventional Doppler radar transmits pulses a single frequency, then “listens” for the echo of the transmitted signal. Imagine someone striking a single piano key, then listening for the echo of that note. In contrast, RaXPol transmits consecutive pulses at slightly different frequencies, then listens for the returned signal from all of them simultaneously. In the piano analogy, instead of striking only one key, you would sweep your fingers over several keys, then listen for the combined echoes of all the different notes. Dr. Andy Pazmany explains in this presentation how this “frequency hopping” technique works. 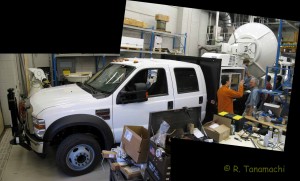 RaXPol was constructed at Prosensing in Massachusetts, funded by a Major Research Instrumentation (MRI) grant* from the National Science Foundation. It will be maintained by the Atmospheric Radar Research Center at OU. It will remain in Norman year-round, and theoretically be available for operations outside of the “normal” chase season (April – May – June), such as hurricane deployments.

I feel a little silly blogging about this radar, because I’m not going to be using it. (That job belongs to Howie’s current crop of grad students.) But, I’ve been hearing about this radar for three years, ever since Howie’s first “woof” when he heard that the grant proposal had been funded, and I’ve never been ashamed to geek out over a shiny new instrument! I can’t wait to see what data the students end up collecting.

* In the abstract, Howie mentions two female Ph.D. students. I was one of them!

Update: The OU College of Atmospheric and Geographic Sciences put out a press release about the RaXPol!