It should come as no surprise to anyone that books about historic tornadoes often pop up on my Amazon recommendations. I’ve probably read two dozen of them. They’ve ranged from drama-rich to science-poor to saltine-dry, with the occasional pompous self-promotion (usually written by a television celebrity) thrown in for good measure. So when Bonar Menninger’s And Hell Followed With It: Life and Death in a Kansas Tornado (2010), about the 1966 Topeka, Kansas F-5, surfaced in my recommendations, I held off on it for a few months. I finally bought it to read on my recent trip to France. I’m pleased to say it was a solid investment that I thoroughly enjoyed.

I offer the following review with the caveats that (1) I read the Kindle edition, and (2) I have no immediate mechanism for evaluating the accuracy of many of the anecdotes. I assume implicitly (and perhaps naively) that the stories have been recorded and conveyed faithfully. However, the extensive list of references (more than 100 of them) at the end of the book gives me some confidence that the author did his homework.

It’s rare that an author comes along who is capable of weaving together a comprehensive narrative of natural calamity in a manner that doesn’t reduce the victims to near-anonymous disaster fodder (and the scientists studying the event to bookish fools, for that matter). From page one, each person who experienced the tornado is incarnated for the reader – usually via an anecdote not involving the tornado, and more often than not a humorous one. We learn about the fiery Mexican housewife, the Depression survivor caring for his disabled children, the up-and-coming disc jockey, and the 8-year-old boy frantically bicycling to a nearby store to run an errand as the tornado bears down. Details as seemingly mundane as what songs or news stories played on the radio, or what TV programs people planned to watch that night (Lost in Space, anyone?) serve to ferry the reader’s imagination back to 1966. The people described could just as easily have been a reader’s (grand)parents, relatives, friends, or neighbors.

Though the stories jump back and forth in time, Menninger masterfully braids them together to provide context for the disaster while describing the disaster itself. (The book contains a handy index at the end, enabling the reader to cross-reference each person, place, and concept.) We learn the history underlying the Burnett’s Mound myth, and about Richard Garrett’s tireless crusade to leverage the pre-existing Cold War knowledge and infrastructure (read: sirens) to prepare Topeka’s citizens for a tornado that he was sure would come someday. Garrett’s efforts in particular are credited with holding the number of tornado fatalities in his state’s capitol down to just over a dozen, for which he received an Exceptional Service Award from the U.S. Weather Bureau.

There’s also the saga of John P. Finley’s 1880s tornado research, the Weather Bureau’s subsequent ban on the use of the word “tornado” in its products, and the redemption provided by the 1948 Fawbush and Miller tornado forecast. Despite the book jacket’s claim that the above story is “virtually unknown,” it’s old yarn to me. That’s not just because I’m a severe weather researcher, but because that story is inevitably retold in just about every contemporary tornado book I’ve read! But that’s a minor gripe about the promotion, not the writing.

Accounts of the tornado’s destruction – chapter by chapter, block by block – never become repetitive. The stories are still just as compelling, and the dread just as fresh and palpable, in Chapter 15 as in Chapter 1. The last couple of chapters deal with the aftermath on scales ranging from personal to national. We learn the fates of the survivors, some of whom had to deal with the physical and mental trauma, in some form or another, for the rest of their lives. Some even report bits of debris still emerging from their skin 20 years later!

From a meteorologists’ perspective, I could not find much to complain about. The highway overpass myth is firmly dispelled at several different points in the book, including the forward. (Several victims encountered the tornado along I-70.) Menninger does a decent job of articulating the state of severe weather science in 1966, and how newer insights have helped to illuminate the events described. However, many of the meteorologists profiled are now deceased, and I did not have the pleasure of meeting them. Perhaps some of my readers can offer their insights as to the accuracy of their stories. 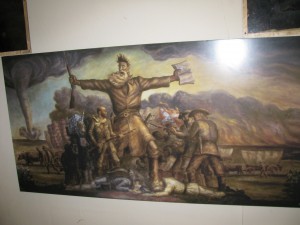 This mural, “Tragic Prelude,” inside the Topeka state capitol rotunda, vividly depicts the tornado as a metaphor for Kansas’ turbulent history. (This is not the actual mural, which was closed for cleaning when I visited, but a photograph of it.)

What really impressed me about And Hell Followed With It was the quality of the writing. The tornado is variously described as an “enormous, whitish-gray basket,” a giant “broadcast spreader” or “lawn mower,” “boiling, gray lava,” “an ancient, crooked finger,” “coiled like a snake” (during its rope-out phase), and so on. The book reads like a work of fiction, so fast and thick do the metaphors come, and so vividly are the people portrayed. Alas, the Topeka tornado was very real, and as I found out on my visits to Topeka during VORTEX2, the city is loathe to forget.

Lay readers, disaster buffs, and professional meteorologists alike should find something to appreciate in And Hell Followed With It. The author has done a remarkable job of aggregating a colossal amount of information about the Topeka tornado and conveying it in a narrative that is digestible, compelling, and sometimes even funny. And Hell Followed With It should set a standard against which other comprehensive tornado histories can be judged.